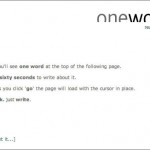 Ten Years from the Word Go

On November 18th of this year, oneword.com will celebrate its tenth anniversary.

I was thinking I should plan something. I thought, maybe it could be based around the very first word, which, for the life of me, I couldn’t seem to recall. So I started digging around and found a site called The Wayback Machine and, bless their hearts, they had an archive from 2002 containing the entire site as it stood then.

First of all, I was proud of my branding instincts (or laziness). If you were to travel time back to the turn of the century, you would find an American president embarrassing the shit out of us; iPods with a laughable one-thousand songs; and if you wrote on someone’s wall—you could go to jail. But any modern-day oneword user would find one thing looking very familiar:

Yes, it’s got a lot of lavender now, which a few people have complained about. Just trust that there are deep, psychological reasons for choosing that color.* Other than that, it’s hardly changed.

Next, I began to scroll back through the entries—back, back, back—and as I got closer to entry number one, I began to anticipate the glory—the profundity—of this debut word; that delicious linguistic morsel, handpicked to inspire unforgettable, groundbreaking prose.

number four, number three, number two—I closed my eyes and clicked once more. I took a deep breath, then began to open my eyes slowly, almost afraid of how poignant one word could possibly be.

And there it was:

The loudest mental WTF? I have ever experienced went off in my brain. Seriously. ASTROTURF? It’s not even a real fucking word.

Luckily there were only about twenty people, comprised mostly of friends and colleagues, on oneword that fateful day, left to suffer through writing about astroturf.

Maybe I thought, Hmmmm . . . astroturf. Can’t go anywhere but up from here.

And up we went.

*not really (yes, the lavender has been replaced since this post was written)