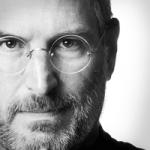 I never thought I could be so impacted by the death of someone I never knew personally until the passing of Steve Jobs.

Since 1989, I have been using Apple products. Every day.

I have worked in print and digital design, post production, music engineering and composition, video editing, advertising, and as a writer—all on a Mac.

I know there are many like me who have never once entertained the idea of buying any other brand of personal computer; many who know that a Mac is more than a machine—it is the realization of a passionate vision; many who hold the Apple brand close to their hearts.

To clarify, I’m sure the world would still be here spinning on its axis without Steve Jobs. I just think it would be a little less beautiful—maybe a lot less beautiful. Anyone reading this would be hard pressed to take a glance around them and not see at least five things created on a Mac.

Although Steve Jobs didn’t invent the Mac, I believe it was his vision that not only made it a reality, but made it art. Which, in turn, inspired art in the hearts of millions around the globe—art that will allow his legacy to live on for a very long time.