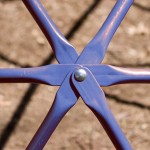 One of my earliest memories is from when I was three. There was a park just down the street and it had one of those dome-shaped jungle gyms. I could see it from our front porch and it seemed like the most magical thing. I wanted to go there so bad I could taste it.

When my mom finally walked me down there, I didn’t taste it, but I smelled it. Apparently the dome was at least one dog’s—if not an entire pack’s—designated shitting area. The Magical Dome of Joy® smelled like dog shit.

Still, I climbed up its beckoning geodesic frame, dry heaving my way to the top. This scenario repeated itself during subsequent visits, and each time the smell got worse. Not necessarily because there was more shit each time, but because my anticipation—my awareness—of shit increased exponentially with each visit.

Fortunately I don’t see them often, but to this day when I see one of those domes, I smell shit.

Yesterday I was reading articles about a certain anti-gay organization, and the ongoing saga of an anti-gay fast-food chain, both unleashing their vitriol on the world, and immediately began to smell shit. A different kind of shit—anti-shit.

When you read the eloquent term, “anti-shit,” what do you think of? Daffodils? Lush fields? Ice cream? More than likely you thought of: shit.

This is why I don’t use the actual names of the above mentioned organizations. Corporations pay ad agencies boatloads (might as well say “shitloads” at this point) of money to bring awareness to their products and brands. Awareness is awareness. And whether we like it or not, we live in an inclusive universe.

A great current example of this is the term “Obamacare.” It was, for years, a derogatory term for the Affordable Care Act, coined and perpetuated by conservatives. In advertising, making your client’s product/brand a household word is the ultimate goal. “Obamacare” was a household word, thanks to Obama’s detractors.

In a stroke of brilliance, the Obama administration decided to embrace Obamacare, posting “I am Obamacare” on their Facebook page. Suddenly, conservatives and bigots had unwittingly conducted a massive ad campaign for Barack Obama. And they continue to.

So when someone says, “I’m anti-[something that you are for]!”, smile, and know that they are unknowingly championing your cause. And when the clerk at checkout says, “Would you like to donate to the fight against [illness]?” Smile and say, “No, but let me know when you want me to donate to the Coalition for Wellbeing.”