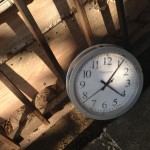 I was born critically premature. I almost died. I like to joke that I’ve never been early since.

Being late is an art. You have to grasp the exact second to be late. It’s not a matter about being fashionably late or embarrassingly late—it is a matter of life and death. Being late for life, being late for death.
[Charbronte]

The worst part about being chronically late is the stress that comes along with it—formulating excuses, devising a defense—that rarely are necessary in the end.

It doesn’t matter how late you are. Just that you ARE late. So stop being late, be early. Save the stress.
[Brandon N.]

Lateness can truly be a matter of life and death—cosmic or otherwise:

The day was late, and the sky was dark. The moon was shining and the stars were lit up like an ambulance flying down the street. Who knows where it was going, but I hoped it would get there in time to save whoever was in need…
[Alicia L.]

One can be late for love:

Or late for dinner. Or a goodbye:

Restaurant was empty. I lost my chance. I never said goodbye.
[Kevin]

We can linger late into a season:

It’s the late season of fall and with it comes colors. Colors of trust; mistrust, warmth, comfort…
[Ashley]

The moon is like a cabaret singer, oh so pretty in her sparkly black dress
She sings a song of crickets, wind and birdies with such finesse

Look how late it is
With our sun high in the sky
Shadows shrunken,
Small circles beneath our feet.
We laugh at the night
For thinking that it could darken
The light that we share.
[Kathryn]

And, whatever you do, do not be late for the lollygrove, which definitely sounds like something one ought not be late to:

late to the lollygrove on the wind trap of my man sister’s baby boy who was born into a worm who weaves clouds. when the bigot bragged on the basty banter, we lavished in the larking broom for the time to tomb on the right ole way for our jolly good days when the latrine laughed for my merry red lips.
[Courtney]

The quoted writing above remains the property of the original author, reprinted here under oneword™’s terms of service. If you are an author whose work was printed in this piece and would like it removed or for us to link directly to your website or blog, please contact us.