Back in Black Decadent 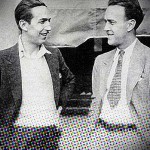 In 1928, Walt Disney and Ub Iwerks created a little cartoon mouse. They both really liked him. Others working at the studio at the time also liked him, using words like “swell,” and “the bee’s knees,” and “spiffy” to describe him.

However, Walt and Ub were adults. They had no idea what kids liked—how could they? So they hired an agency that specializes in what’s known as “focus testing” or “focus groups.”

Walt and Ub positioned themselves behind the two-way glass as a gaggle of excited youngsters shuffled in.

Carl, the moderator, walked into the room, reached into his satchel and brought out a sketch of the cartoon mouse, holding it up for the children to see.

“Gee, is that a muskrat?” Herbert (or “Herbie” as his mother had introduced him) was the first to speak.

Carl chuckled, “Anyone else?”

Ub slammed his coffee cup on the table, spilling a little, “That’s the stuff!”

Walt just sat in silence, anxious puffs of smoke dancing from his pipe.

“Our friend, Norma, here was right—” before Carl could finish the room erupted into a symphony of invaluable consumer input.

“A billy goat!” said Hazel, and burst into a giggle.

Carl knew the drill. He just let them get it all out.

“What did you say earlier?”

“A mouse. A cute little mouse.”

“These are the top five names we’ve chosen,” Carl explained. “You tell us which ones you like.”

Carl holds up a sign that reads, “FRANCO” in big black letters.

After about thirty seconds of silence, one of the boys spoke up.

“I don’t care much for such names.” said Eugene. The other kids nodded in agreement.

“Damnit. I really liked Franco.” said Ub, not taking his eyes from the glass. He scribbles and mumbles some more, “Franco…out.”

Walt removed the pipe from his mouth for the first time in forty minutes, leaning slightly toward the window, listening intently.

“What do you think of Mickey, kids?” Carl runs his hand across the letters.

“I don’t like it.” Said Earl. “It reminds me of my uncle who’s always drinkin’ and yellin’ at us kids.”

“It rhymes with ‘sticky’!” said Eugene.

Carl looked toward the mirror and shrugged.

“Ugh.” Walt wiped the sweat from his forehead. “Lillian loves that name.”

Carl continued through “Mortimer,” “Tank,” “Neptune,” and “Fleebee,” all with mixed reactions. He took a drink of his coffee, then held up another sign, “Flanky, what do you think of—”

Walt Disney’s mind had drifted off, as it was wont to do. He snapped back to the present with the sound of the children’s chanting. “What are they saying? ‘Flank me!’?”

“Who the fuck put ‘Flanky’ on the list?” Ub muttered as he rummaged through his papers.

“I sure as hell didn’t.” said Walt. “It’s ridiculous. Listen to them.”

The chanting subsided. Carl packed his papers back into his satchel, thanked the children, instructed them on how to get their nickels, then walked into the back room.

“Well, it looks like ‘ol Flanky here is gonna be a star!” he said, loosening his tie.

Walt stands, puts on his hat without a word, then walks out, slamming the door behind him.

“Where did ‘Flanky’ come from?” asked Ub.

“What—what do you mean? It was with the—” Carl pulls the stack of names out of his bag, shuffles through them, then looks on the back of the sheet. “Oh no.”

“It was…for another focus group.” Carl sputtered. “A steak distributor.”

Ub looked at Carl, his face turning red. He paused, then picked up his day-coat and walked out the door.

As we all now well know, Flanky Mouse went on to be a huge success. And the Walt Disney empire is better for that fateful day in focus testing all those years ago.