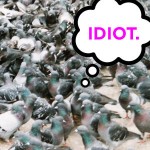 By brian On March 27, 2011 · In General
Feeding birds appears to be a sign of either wisdom, boredom, or senility. I never see young people feeding birds. I assume it’s boredom, but will give it a shot on the off chance that wisdom is involved.

One such wise and/or bored and/or senile individual had scattered birdseed across a nearby street the other day and the Pigeon Brigade was out in full force. As I watched them go to town while waiting for my dog to do her thing, a car approached the street-spanning flock, rolling to a stop a few feet in front of the birds. He sat there for a few seconds, then lays on the horn—

He looks at me and does the “What?” shrug thing, waits another second, then proceeds to plow through the sea of avian street diners. I thought for sure there would be casualties, expecting to see bird carcasses strewn across the street. Carnage en masse. But, no, they were fine.

Nowhere in nature does a multi-ton chunk of metal come rolling across a field. It’s not natural. If a herd of buffalo had come charging down Yucca Street, you can bet the pigeons—and me and the dog—would be getting the hell out of the way. Animals don’t invent stuff, so they don’t comprehend invented stuff. Most things that they do acknowledge are things that are manmade equivalents of natural objects, e.g. Doghouse=cave; Bird feeder=flower; Carpet=grass; Hamster wheel—well, okay, hamsters are either just really smart or really stupid.

What’s my point? Good question. First of all, honking at pigeons is stupid. Second, don’t metaphorically honk at pigeons:

One Response to Honking at Pigeons