Pro-Intelligent Thou Shalt Sort Of 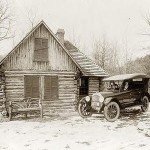 A Life Without Gay (or: I Heart Log Cabins)

If someone is gay and wants to serve in a military rampant with John Waynes and Pattons—they should. That’s courage and determination if I’ve ever seen it.

I’m happy to hear that someone in the US government has seen the light. In fact, the only people that should be banned from the military are, well, people like me.

For the people that are furious about this; for the ignorant hoards that spent millions pushing Proposition 8 in California—I have a proposition for you:

Why not go all the way? Why be half-assed? Why not boycott everything involving gay people?

It won’t be easy, but it’s your cause, right? And causes aren’t easy.

Let’s start with something close to home:

HOME
No more furniture or décor designed by homosexuals. This includes all art, knick-knacks, and appliances. Not forgetting the exterior and general design of the house itself. (Straight knockoffs are not allowed.)

Great, you live in a log cabin, let’s move on to:

TECHNOLOGY
You can’t read this article. The father of modern computer science, Alan Turing, was totally gay. Oh, and what in technology didn’t DaVinci’s gay hand remotely touch? Let’s take a steam train on over to:

So you’re sitting in a burlap sack on a barrel enjoying KBYU, the Mormon church’s public station, if you can stomach the homoerotic tension between Bert and Ernie on Sesame Street. (Oh, and your TV is black and white and ugly.)

MUSIC
It’s nearly impossible for an artist, if not gay themselves, to make it from mic to master without involving the talents of a gay person.

Then there’s “the blues,” all-American and infused into every rock-n-roll song, which could hardly exist without the very lesbian “mother of the blues,” Ma Rainey.

That’s fine, since KBYU has the Mormon Tabernacle Choir (so long as they don’t riff off Tchaikovsky). Oh, and Justin Bieber, for at least another year.

Rufus Wainwright is okay since he is so gay, it’s neither here nor there.

HUMOR
The ever-flaming Oscar Wilde and gay-laced troupe of Monty Python directly or indirectly inspired any popular comedian alive today. Plus, what would Dane Cook talk about?

TRANSPORTATION
You could attempt driving, but there are too many design elements intrinsic to driving, from road signs to street layout and traffic signals, that likely had a gay hand involved. Plus, a gay pencil almost certainly graced the drawing board for even the most modest of minivans. And you can forget BMW or Mercedes.

I think the Model-T suites you just fine.

I could continue with advances and triumphs in Medicine, Cosmetics, Literature, Politics, Science, Physics, Education, ad nauseam. My point is that, like it or not, we’d all be looking pretty shabby (not shabby chic, mind you) without the astounding contributions and influence of gay men and women.

The word of the day is equality. This is a big step toward it. The next step is to remove the labels altogether, and recognize that we’re all just human beings trying to make the world a better place.